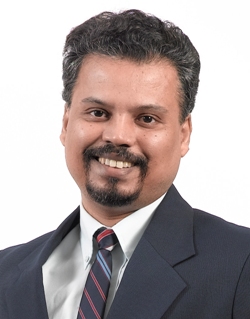 Anamitra Makur is an Associate Professor in the School of Electrical & Electronic Engineering at the Nanyang Technological University, Singapore, since 2002, where he currently holds the position of the Deputy Head of the Division of Information Engineering. He received the B.Tech. degree from Indian Institute of Technology, Kharagpur, and the M.S. and Ph.D. degrees from California Institute of Technology, Pasadena. He worked in Indian Institute of Science, Bangalore, until 2002 in various capacities, the most recent being a Professor. He also held visiting positions at University of California at Santa Barbara, University of Kaiserslautern, Griffith University at Brisbane, and Keio University at Yokohama. His current research interests include multirate signal processing, signal/image/video compression, and image processing. Dr. Makur is the recipient of several awards, notable being the 1998 Young Engineer award from the Indian National Academy of Engineering, and the best paper award in the IEEE APCCAS 2006 conference. He was also the co-author in the student paper award of the IEEE ICASSP 2006 conference. He has served as the Associate Editor of the IEEE Transactions on Signal Processing during 2001-2006.