Zhiping Lin received the B. Eng degree from South China Institute of Technology, China in 1982, and the Ph.D. degree from the University of Cambridge, England in 1987. Subsequently, he worked as a postdoctoral researcher at the University of Calgary, Canada. He was an associate professor at Shantou University, China from 1988 to 1993, and a senior engineer at DSO National Laboratories, Singapore from 1993 to 1999. Since Feb. 1999, he has been an associate professor at the School of Electrical and Electronic Engineering (EEE), Nanyang Technological University (NTU), Singapore.

Dr. Lin was the Editor-in-Chief of Multidimensional Systems and Signal Processing for 2011-2015, and has been in its editorial board since 1993. He was an Associate Editor of IEEE Transactions on Circuits and Systems - II for 2010-2011, and a Subject Editor of the Journal of the Franklin Institute for 2015 - 2019. Dr Lin is a member of the Digital Signal Processing Technical Committee (TC) and the Biomedical Circuits and Systems TC of the IEEE Circuits and Systems Society. He has served in organizing/technical committees of various international conferences, including General Chair of ICICS 2013.

Dr. Lin is the co-author of the 2007 Young Author Best Paper Award from the IEEE Signal Processing Society, and received several Best Paper Awards in international conferences. He was Distinguished Lecturer of the IEEE Circuits and Systems Society (CAS) for 2007-2008, and served as Chair of IEEE CAS Singapore Chapter for 2007-2008, 2019. 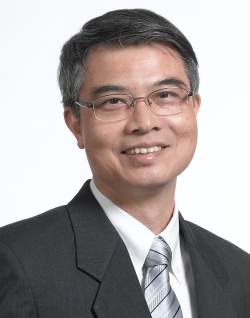