Sin Ain is a Senior Lecturer in SMO. He lectures on Organisational Behaviour and Military Leadership at the Undergraduate level.

Before joining NTU, Sin Ain worked as a Military Officer with the Ministry of Defence, and has over 20 years of organisational and leadership experience as trainer, organisation developer and leader in various local and overseas command appointments. During his career in the military service, he had opportunities in deployment for peace-monitoring and humanitarian assistance in disaster relief operations. He was trained in Organisational and Leadership Development, and designated as the Army Leadership Branch, Sin Ain had the opportunity to work with Army senior leadership in the designing and conducting of Command courses to groom and prepare Singapore Armed Forces (SAF) future commanders. He was trained as the Army Executive Coach to provide coaching support for SAF commanders.

Prior to joining NTU, Sin Ain also had the experience in helping a local enterprise in setting up a Foundation for Humanitarian Assistance and Disaster Relief (HADR). He was appointed as the Executive Director of the Foundation and conducted it's maiden HADR mission to Philippines for Typhoon Hagupit.

Sin Ain had also participated in 4 National Day Parade Executive Committees namely 2003, 2006, 2008 and 2012. He led a team of engineers, programmers and data security expertise from several enterprises in the setting up of the inaugural NDP Ticket e-application and e-balloting system in 2003. He also chaired the Branding and Publicity Committee in NDP2012, and organised several national-level public engagement projects during the year-long celebration. 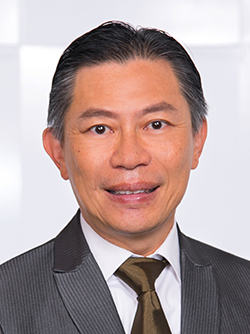 His research interests include Leadership Development, Strategy and Organisational Development. Sin Ain had been the co-facilitator for Army Training Hub Retreats and Workplace Seminars. He also facilitated several Team Building sessions for HQs and Unit Command Teams during his tour in SAF. He is also interested in Cross-cultural team dynamics as he had the experience in leading a peace-monitoring team in Aceh Monitoring Mission comprising of European Union and ASEAN countries representatives.