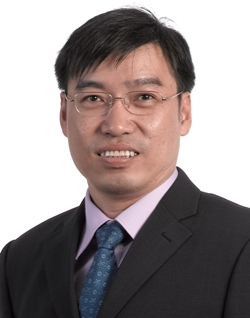 Chip Hong Chang received the B.Eng. (Hons.) degree from the National University of Singapore, in 1989, and the M. Eng. and Ph.D. degrees from Nanyang Technological University (NTU), Singapore, in 1993 and 1998, respectively. He served as a Technical Consultant in industry prior to joining the School of Electrical and Electronic Engineering (EEE), NTU, in 1999, where he is currently a Professor. He is also chief consultant of Rock Solid Research Lab. He held joint appointments with the university as Assistant Chair of Alumni of the School of EEE from June 2008 to May 2014, Deputy Director of the Center for High Performance Embedded Systems from 2000 to 2011, and Program Director of the Center for Integrated Circuits and Systems from 2003 to 2009, and was consultant to Flextech Electronics and Panasonic Singapore Laboratory. He has coedited six books, published 13 book chapters, more than 100 international journal papers (>80 are in IEEE) and more than 180 refereed international conference papers (mostly IEEE). His current research interests include hardware security, AI security, biometric security, trustworthy sensing and hardware accelerators for post-quantum cryptography and edge computational intelligence. He has delivered more than 50 keynotes, tutorials and invited seminars, including tutorials at the 2017 Asia and South Pacific Design Automation Conference (ASP-DAC 2017) and 2017 IEEE International Symposium on Circuits and Systems (ISCAS 2017). He is the recipient of the 2006 NTU Research Outstanding and Award Recognition Scheme, the 2007 British High Commission Collaboration Development Award for Microelectronics and Embedded Systems and the 2007 Canada Microsystems Strategic Alliance of Quebec Collaboration Development Award, co-recipient of the AsianHOST 2021 Best Paper Award, PrimeAsia-2010 Gold Leaf and Silver Leaf Certificates, and coauthor of the finalist of AsianHOST 2019 best paper award, AsianHOST 2017 Cisco best paper award, ISCAS 2015 best student paper award competition and VLSI 95 best paper award. He was conferred the Venus International Foundation 2022 Science and Technology Award (VISTA 2022) of Excellence in Hardware Security.