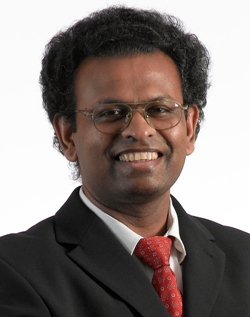 Ponnuthurai Nagaratnam Suganthan received the B.A degree, Postgraduate Certificate and M.A degree in Electrical and Information Engineering from the University of Cambridge, UK in 1990, 1992 and 1994, respectively. He obtained his Ph.D. degree from the School of Electrical and Electronic Engineering, Nanyang Technological University, Singapore. He was a predoctoral Research Assistant in the Department of Electrical Engineering, University of Sydney in 1995–96 and a lecturer in the Department of Computer Science and Electrical Engineering, University of Queensland in 1996–99. Since 1999 he has been with the School of Electrical and Electronic Engineering, Nanyang Technological University, Singapore where he was an Assistant Professor and now is an Associate Professor. He is an associate editor of the IEEE Transactions on Evolutionary Computation and Pattern Recognition Journal. His research interests include evolutionary computation, pattern recognition, bioinformatics, biometrics, multiobjective evolutionary algorithms, applications of evolutionary computation and neural networks. He is a senior member of the IEEE.

My primary research areas are evolutionary computation (or optimization) methods such as the particle swarm optimization, differential evolution and evolutionary programming and pattern recognition. We apply these methods to solve problems in domains such as optics, bioinformatics and so on.