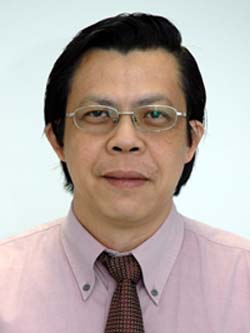 Professor Leong Kai Choong joined the then Nanyang Technological Institute (NTI) as a Lecturer in 1984 after working for several years as a mechanical engineer in the manufacturing and construction industry in Singapore. As Associate Professor in the School of Mechanical and Aerospace Engineering (MAE) since 1991 and Fellow of the Renaissance Engineering Programme (REP) at the Nanyang Technological University (NTU) since 2011, he had served concurrently as Vice-Dean (Academic) from June 2002 to May 2006 and then as Associate Chair (Academic) from June 2006 to May 2008. Professor Leong’s research has focused on single- and two phase heat transfer as applied to the thermal management of electronic packages and the investigation of solid-gas adsorption cooling systems. He has been principal investigator and active co-investigator for many research projects funded by NTU and external funding agencies and has published more than 110 papers in refereed international journals, more than 80 papers in international conference proceedings and 5 book chapters. His h-index is 29 and total SCI citation counts as of 18 March 2021 are 5,225 and 5,042 (excluding self-citations).

Professor Leong has served in a variety of positions in several professional societies. He was President of the American Society of Heating, Refrigerating, and Air-Conditioning Engineers (ASHRAE) Singapore Chapter in 1994-1995. He is a Registered Professional Engineer (Mechanical) in Singapore and a Life Member of the Institution of Engineers, Singapore.

Professor Leong enjoys teaching Heat Transfer to third year mechanical engineering and aerospace engineering students and the fundamentals of fluid mechanics, thermodynamics and heat transfer to first year students in the REP. He was voted by MAE students as the Year 3 Teacher-of-the-Year in 2010, 2011 and 2012.