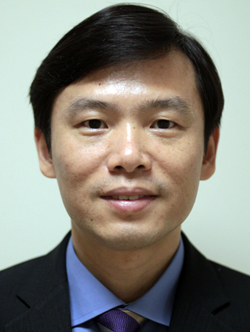 Dr Chen completed his doctorate in electrical engineering with research focus on electrophysiology at University of Missouri - Columbia in 2002. Then he did his post-doctoral training in Department of Molecular and Cellular Biology at Harvard University where he conducted research on nanopore based single-molecule sensing. In 2005, Dr. Chen joined Division of Bioengineering at Nanyang Technological University (Singapore) as an assistant professor. He is now a full professor of bioengineering in school of chemical & biomedical engineering. Dr. Chen’s group works at the interface of biology, nanomaterials, and engineering in the efforts to develop novel nanotechnologies to address unmet problems. He has published >230 papers in reputable journals such as Advanced Materials, Nature Communications, Angewandte Chemie International Edition, Nano Letters, ACS Nano, Physical Review Letters, Advanced Functional Materials, Small, Biosensors & Bioelectronics, Chemical Society Reviews, etc., which have received >23000 citation counts according to Web of Science.

US 2013/0040439 A1: Method Of Modifying Electrical Properties Of Carbon Nanotubes Using Nanoparticles (2018)
Abstract: Various embodiments relate to a method of modifying the electrical properties of carbon nanotubes. The method may include providing a substrate having carbon nanotubes deposited on a surface of the substrate, and depositing on the carbon nanotubes a coating layer comprising a mixture of nanoparticles, a matrix in which the nanoparticles are dissolved or stabilized, and an ionic liquid. A field-effect transistor including the modified carbon nanotubes is also provided.