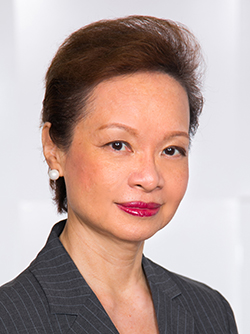 Dr. Siri’s expertise is in the areas of international finance, corporate finance, and international economics with over 30 years of experiences as a high-level executive, a business consultant and an academic.

Dr. Siri joined the Banking and Finance Department at the Nanyang in 2009. Subsequently, she served as the Director of Banking and Finance (B.Bus) from 2010 to 2014. She teaches international finance, corporate finance, and economics in the Executive MBA, Nanyang MBA, Nanyang Fellow MBA, Masters in Financial Engineering and the undergraduate programs. Besides teaching in degree programs, Dr. Siri also provides executive training on various topics such as business trends in Asia, the economic integration in ASEAN, financial crises in the US and Euro Area.

Dr. Siri’s research interests are on international financial and economic issues related to ASEAN and the Euro Area. She has been frequently invited to give talks on the above issues, both in Singapore and internationally. Her works have been published in various management journals such as the Europe’s World Journal, VDI Nachricten (Germany), The Economia (Greece), The Edge Investment Journal, Straits Times and Business Times. In addition, she develops case studies in finance and economics which have been published by the Asian Case Studies Centre.

Prior to pursuing the academic career full time since 1996, Dr. Siri held various executive positions in international financial services
Dr. Siri began her career as an economist with the World Bank in Washington D. C. and held responsibilities for lending to Egypt, Brazil, and Poland. Then she joined Bangkok Bank as Vice President for Treasury and Credit Policy. Later, she became the CEO of a real estate company where she successfully led the restructuring and helped its listed in the Stock Exchange of Thailand. After careers in big corporations, Dr. Siri tried her hands on entrepreneurship to co-found and assume the role of Chief Financial Officer for BIMind, a firm that specialized in consulting, designing and building business intelligence applications.

After 13 years of careers as a business executive, she switched to academic, while continues to provide business consulting part-time. Before joining NBS, she was a finance faculty at University of Minnesota, USA.