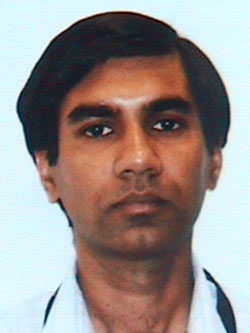 My research interests lie in exploring the physics of strongly correlated many body systems combining analytical and computational approaches, focusing on novel quantum phases and quantum phase transitions that arise from the interplay between competing interactions, lattice geometries and external potentials like applied magnetic field. The search for such exotic phases is driven by fundamental and technological motivations. The technological interest results from the possibility of novel functionalities – such as colossal magnetoresistance and high temperature superconductivity – associated with these new states of matter. The theoretical motivation lies in understanding the nature of fundamental interactions in matter. Working closely with several experimental groups, I use analytical methods supplemented by large scale computer simulations to develop theoretical frameworks (based on appropriate microscopic models of the relevant materials) to explain the many unique experimental observations and provide guidelines for future experiments in different strongly correlated systems including quantum magnets and ultracold atoms trapped in optical lattices. Some representative problems that I have worked on in the recent past are:

1. Supersolid: The supersolid is a novel phase of matter that has simultaneous solid and superfluid character. Although first postulated more than 50 years ago, this phase has never been observed in nature despite intense experimental efforts. I showed for the first time the conditions necessary for realizing such a phase in trapped ultracold atoms in optical lattices. Subsequently, I extended the idea of supersolid phase to quantum magnets and proposed the spin supersolid phase, an idea that has gained widespread recognition in the Condensed Matter Physics community.

2. Quantum magnetism at high magnetic fields: The rapid advance in material synthesis has produced a wide variety of spin compounds with different moments, interactions and geometries. The interplay between competing interactions, coupled with strong magnetic fields results in several novel quantum phases. I work with several experimental groups at the National High Magnetic Field Laboratory (USA) as well as at Oxford and Cambridge Universities (UK) to understand the unique experimental observations in many such compounds including formation of magnetic crystals and Bose Einstein Condensation of magnons.

3. Ultracold atoms in optical lattices: A rapidly emerging field of research lies at the interface of Atomic and Condensed Matter Physics. Magneto-optic trapping and evaporative cooling of atoms has opened a new frontier in the study of strongly correlated systems. I have investigated the novel superfluid to insulator transition in these systems, the interplay between interacting Bosons and Fermions, and the formation of quantum glassy phases in the presence of disorder.

4. Control of quantum systems: I have developed a scheme to designing soft scalable pulses for the coherent control of interacting quantum systems (qubits). Such pulses have important applications in the fields of solid state Nuclear magnetic Resonance, quantum information processing (including quantum computation) and optical (laser) probes for biomedical applications.

5. Theoretical biology: Cholesterol plays an important role in the stability of lipid membranes. Experiment shows that at certain concentrations of cholesterol, the membrane acquires extra stability. Using a simple model, I explained the origin of this enhanced stability.