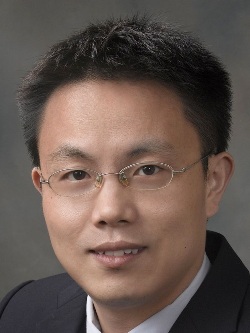 Dr. Quan Liu received the PhD degree in Biomedical Engineering from the University of Wisconsin, Madison. He is currently an associate professor in the School of Chemical and Biomedical Engineering at Nanyang Technological University in Singapore. His research interest is focused on optical imaging and spectroscopy for medical diagnostics. Dr. Liu has published more than sixty journal papers and held sixteen US patents/applications in the field of biomedical optics. He has also secured a total mount of external funding more than four million USD to support his group. Dr. Liu has served as a reviewer for several top journals, such as Optics Letters, Optics Express and Nature Communication, and multiple international funding agencies as well as a subcommittee member and session chair for multiple international conferences such as European Conferences in Biomedical Optics (ECBO) and Photonics West. Dr. Liu is a senior SPIE member.


Dr. Quan Liu and his group's research in biomedical optics, i.e. biophotonics, focus on developing "optical biopsy" methods based on optical imaging and spectroscopy including diffuse reflectance, fluorescence and Raman techniques. These methods can non-invasively characterize the pathological status of tissues for medical diagnostics to reduce or even remove the need of performing physical biopsies. This group aims to address fundamental challenges that prevent these techniques from being clinically applicable by developing novel optical methods and/or incorporating other complementary techniques such as elastography, nanotechnology enabled plasmonics and ultrasound imaging, in a purpose to enhance the capability of optical biopsy methods in the accuracy, the signal to noise ratio, the spatial resolution and multiplexing capability. We are also interested in looking at the therapeutic effect of laser enabled therapy in cancer and the identification of rare tumor cells with optical spectroscopy. In parallel to technical development, his group also performs translational research to transfer these powerful optical techniques from benchtop to beside.

For more information, please visit his group's homepage at http://www.ntu.edu.sg/home/quanliu/.

US 2015/0062573 A1: Optical Detection Device And Optical Detection Method (2018)
Abstract: According to embodiments of the present invention, an optical detection device is provided. The optical detection device includes an optics arrangement configured to generate an annular illumination pattern to illuminate a portion of a sample and further configured to receive a return light from the portion of the sample illuminated by the annular illumination pattern; and a detector arrangement configured to detect the return light. According to further embodiments of the present invention, an optical detection method is also provided.