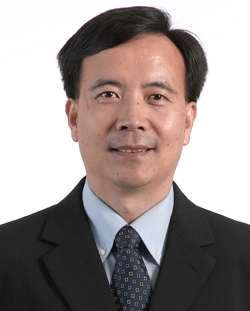 Lihua Xie received the B.E. and M.E. degrees in electrical engineering from Nanjing University of Science and Technology in 1983 and 1986, respectively, and the Ph.D. degree in electrical engineering from the University of Newcastle, Australia, in 1992. Since 1992, he has been with the School of Electrical and Electronic Engineering, Nanyang Technological University (NTU), Singapore, where he is currently Professor and Director of $25M National Research Foundation Medium Sized Centre for Advanced Robotics Technology Innovation (CARTIN) and Co-Director, Delta-NTU Corporate Laboratory for Cyber-Physical Systems which received $45M funding from National Research Foundation of Singapore, Delta Electronics and NTU, and has over 100 researchers including 20 professors, 51 research staff and 30 PhD students. He served as the Head of Division of Control and Instrumentation from July 2011 to June 2014 and the Director, Center for E-City from July 2011 to June 2013. He held teaching appointments in the Department of Automatic Control, Nanjing University of Science and Technology from 1986 to 1989.

Dr. Xie’s research interests include robust control, networked control systems, multi-agent networks, indoor positioning, human activity recognition and unmanned systems. He has published 9 books, over 500 journal papers, 380 conference papers, and 20 patents/Technical Disclosures. He has been listed as a highly cited researcher (SCI: 27400, H-index: 79; Google Scholar: 44,600, H-index: 103) by Thomson Routers and Clarivate Analytics annually since 2014. He has secured a total research grant of over 90 million Singapore dollars as programme and project PI, and graduated 38 PhD students. He has received many awards for his research including IBM Faculty Award, Changjiang Scholar Award from Ministry of Education of China, and best paper awards at 8 international conferences such as the Guan Zhao Zhi Award from the 29th and 39th Chinese Control Conference (CCC) both of which had over 2000 participants, 7th Asia Control Conference (ASCC), 18th International Conference on Advanced Robotics (ICAR 2017), etc.