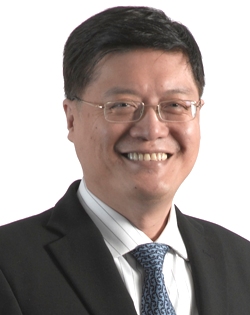 Professor Tay Beng Kang received his B.Eng (Hons) and M.Sc. degrees from the National University of Singapore in 1985 and 1989, respectively, and was awarded Ph.D. from the School of Electrical and Electronic Engineering (EEE) by Nanyang Technological University (NTU) in 1999. He joined the School of EEE of NTU as a Lecturer in 1992 and was subsequently promoted to Senior Lecturer, Associate Professor, and Full Professor in 1998, 1999, and 2006, respectively.

Prof Tay is active in research and he is a pioneer in Filtered Cathodic Vacuum Arc (FCVA) technology. He has made many contributions in thin film materials especially in amorphous carbon, carbon nanotubes, nanocomposites and 2D transition metal dichalcogenides (TMDC). His current research includes the growth and applications of carbon based, 2D TMDC materials for thermal and high frequency applications such as thermoelectric, EM isolation, waveguides, etc. To date, Prof Tay has secured more than S$15M of research funding in which S$11.4M as the PI. He has published more than 420 journal papers with a Google Scholar H-index of 74 and 6 book chapters. Prof Tay is also the co-inventor of 17 patents in which some of these patents were exclusively licensed to Nanofilm Technologies Pte Ltd, which was established in 1999 as a spin-off from NTU. The research team was subsequently awarded the ASEAN Outstanding Engineering Award and National Technology Award in 1997 and 2000 respectively for their outstanding R&D contributions on a new Filtered Cathodic Vacuum Arc Technology. In addition, he was awarded the NTU Alumni Service Award in 2003, the IES Prestigious Engineering Achievement Awards in 2007, the Long Service Medal (Singapore National Day Awards) in 2015 and has been the IES Fellow since 2007.

Prof Tay’s research has been recognized internationally where he works closely with companies such as Nanofilm Technologies International, Excelitas Technologies, Thales Solution Asia where he also supervised several EDB Industry Postgraduate Programme (IPP) students. He has been an invited speaker at numerous international conferences and universities. At present, he is the Deputy Director of CINTRA (since 2014) (https://www.ntu.edu.sg/cintra), sub-committee member of NTU Research Council (since 2017) and a member of NTU Senate Committee on Faculty (since 2020).