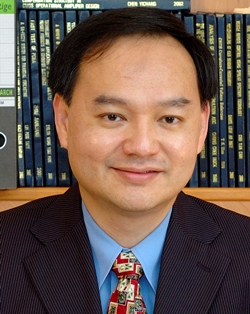 Joseph Chang received the PhD degree from the Department of Otolaryngology, Faculty of Medicine, The University of Melbourne, Australia. He is presently with the School of Electrical and Electronics Engineering, Nanyang Technological University (NTU), Singapore, and is adjunct at the Texas A&M University (USA). He was the former Associate Dean (Research and Graduate Studies), College of Engineering, NTU.

He has founded two start-ups.

Joseph Chang is multi-disciplinary engineer with research encompassing core CAS-related fields including analog, digital and aerospace circuits/systems; biomedical/life-sciences related-fields; and the emerging printed-electronics. He received the B.Eng (ECE) from Monash University, and Ph.D. from the Department of Otolaryngology, Faculty of Medicine, University of Melbourne, and has two-years IC-related industrial-experience. He is currently with the Nanyang Technological University, Singapore (and Adjunct at Texas A&M).

In the IEEE, he contributed to both core and multi-disciplinary fields, including as Guest-Editor of the Proceedings-of-the-IEEE on ‘Computational System-Biology’, Guest-Editor of the CAS-Magazine on ‘Special-Issue on Life-Sciences’, Editor of the CAS-Magazine’s Open-Column, Chairperson of the IEEE-NIH Life-Sciences-Systems-and-Applications (LiSSA) Workshop, Chairperson of two IEEE-NIH CAS-Medical-and-Environmental (CASME) Workshops, Chairperson of the LiSSA Technical-Committee, Associate-Editor of IEEE TCAS-I (3-terms) and -II, Associate-Editor of the IEEE CAS-Magazine, Distinguished-Lecturer, etc. Of specific interest, he organized the successful merging of the BioCAS and LiSSA technical-committees, largely for CAS’s concerted/united life-sciences efforts. He was instrumental in several non-IEEE establishments’ engagement in CAS’s activities, including other IEEE societies, National-Institutes-of-Health, Telemedicine-and-Advanced-Technology-Research-Center, American-Institute-of-Medical-and-Bioengineering, etc. Impact thereto includes NIH’s request for each of their 27 institutes a copy of the aforesaid CAS-magazine’s special-issue, representation by different IEEE societies at the IEEE-NIH workshops and NIH financial support for CASME.

He has published over 200 referee-reviewed publications (primarily in IEEE) and has over 20 patents (awarded/pending). In the field of ‘Class-D amplifier’, he has the most number of publications in the IEEE; and the top-ranked paper (excluding patents) and four of the top six papers in ‘Digital Class-D Amplifier’ in Google Scholar. He has received numerous grants from local and international funding-agencies (including DARPA and the EU) and from industry, amounting to >US$10M. He has founded two startups, and has designed numerous ECE-related products for industry.

His research interests are largely emerging technologies, including bioengineering, microfluidics, audiology, psychoacoustics, and analog and digital circuit designs. He leads a group of 25 researchers - externally funded - including from DARPA (USA) and from the European Union. Some description of his work may be found in the following editorials of the Proceedings of the IEEE and the IEEE Circuits and Systems Magazine (where he served as a Guest Editor):

S. Wong, M. Ogorzalek and J. Chang, ‘Editorial on the Special Issue on Computational Systems Biology’, The Proceedings of the IEEE, Aug 2008