He published > 542 papers in SCI-IF int. journal (430); int. conf. proceedings (130), textbook chapters (>105) and others (32) over the 27 years. Co-edited 14 books on “Cardiac Pumping and Perfusion Engineering” by WSP (2007); “Imaging and Modelling of Human Eye” by Artech (2008); “Distributed Diagnosis and Home Healthcare, v.1” by ASP (2009); “Performance Evaluation in Breast Imaging, Tumor Detection & Analysis” by ASP (2010); “Distributed Diagnosis and Home Healthcare, v.3” by ASP (2011); “Computational Analysis of Human eye with Applications” by WSP (2011); “Human Eye Imaging and Modeling” by CRC (2011); “Multimodality Breast Imaging” by SPIE (2013); “Image Analysis and Modeling in Ophthalmology”; “Ophthalmology Imaging and Applications” by CRC (2013, 2014); “Bio-inspired Surfaces and Applications” by WSP (2016); “Application of Infrared to Biomedical Sciences” by Springer (2017) and “Computation and Mathematical Methods in Cardiovascular Physiology” by WSP (2019). Also, co-authored a text book: “Compressor Instability with Integral Methods” by Springer (2007).

He is the:
Lead Editor-in-Chief for the ISI Journal of Mechanics in Medicine and Biology for
dissemination of original research in all fields of mechanics in medicine and
biology since 2000;
Founding Editor-in-Chief for the ISI indexed Journal of Medical Imaging and
Health Informatics;
Associate editor or EAB of various referred international journals such as Applied
Intelligence, BioMedical Engineering OnLine, Computers in Biology & Medicine,
Journal of Advanced Thermal Science Research, and, guest editor for the Int.
Journal of Computer Applications in Technology, Computational and
Mathematical Methods in Medicine & Int. Journal of Medical Systems.

He is an invited keynotes speaker for more than 30 international scientific confs./workshops. He is active in offering consulting services & a fellow of SAF-NTU Academy. 21 of his thermal imaging papers have been adopted as references in both Singapore Standard (SS 582: 2020) and ISO/TR 13154:2009 / IEC 80601-2-59: 2017. He is also presently serving as panel member for the Biomedical and Health Standards Committee since 2011, Singapore. He received the SPRING Singapore Merit Award (2016) for his contributions to the Singapore Standardisation Programme.

The affable adjunct NUH scientist has a special interest in infrared (IR) physics & technology and has contributed greatly to research on IR, in particular on application of IR to biomedical sciences. The co-inventor of 3 USA patents on multiple analytical software classifier programs to identify the different stages of breast cancer development using thermal data with Lifeline’s First Warning TM system, he further explores the use of IR in the field of ophthalmology for early detection of health abnormality. Those 3 patents have attracted more than USD10m from USA directly. This First Warning Systems are processed for the CE Mark currently & to be followed by clinical validation with FDA and market entry of the inventions in select European markets. He collaborates with fellow researchers from National Health Group Hospitals, also, Poland and USA so as to consistently achieve breakthrough such as concluding the possibility of using the Biofield Diagnostic System as a better objective assessment tool for complimentary breast cancer detection.

He is granted a patent (AusPat: 2021101042) in “loT enabled EPCG device unit for nursing heart health distantly with Artificial intelligence at cloud-based environment”. He received the Engineering and Technology [UK] Innovations Awards 2020 for the Model-based Engineering Competition. Finalist (selected out from a total of 300 entries) in category for the ‘Excellence in Model-Based Engineering’. Highly Commended by all the 6 panel judges- International awards ceremony, London. He is the lead for project "AI in wind farms" with Western Sydney University and showcases the passion, commitment and innovation in engineering and technology today. 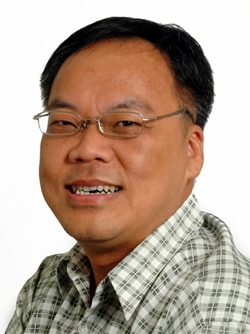