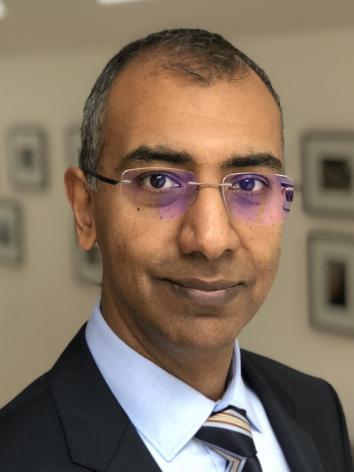 Yougesh Khatri is an Associate Professor at Nanyang Business School and Academic Director of the Nanyang Fellows MBA Programme at NTU. He is also an Associate Fellow at the Asia-Pacific Programme and the Global Economy and Finance Department of Chatham House (London), Senior International Advisor to the Australia-Indonesia Partnership for Economic Development (PROSPERA, Jakarta), and a the Board Member of OMFIF Foundation (London).

Dr Khatri returned to full-time academia in late 2018 after 20 years in the public and private sectors, including more than a decade at the IMF and much of the past decade in financial markets.

From 2015 to early 2018, he was based in London and travelling regularly to Asia for macroeconomic and financial sector advisory work - including as a Senior International Advisor to PROSPERA in Jakarta and as a consultant to the Asian Development Bank on various projects in Asia. He also developed and taught the International Elective (Macroeconomics and Finance for Practitioners) at Imperial College Business School during 2015-17, and was a guest lecturer at Cambridge’s Judge Business School in 2018.

During his time at GIC (2011-2015), Dr Khatri’s positions included Co-Head of the Economics and Capital Markets, Head of Economics, Head of New Horizons and advisor at the GIC London office. He also led macroeconomic research on Southeast Asia at Nomura Singapore Ltd during 2010-11.

Between 1998 and 2009, he was an economist with the International Monetary Fund (IMF). He spent two years at the IMF Regional Office for Asia and the Pacific in Tokyo (working on Japan and regional issues), and three years as an IMF Resident Representative in Jakarta.