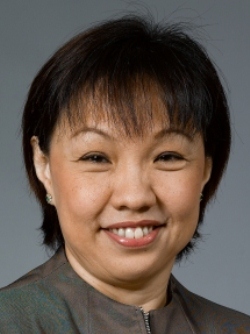 Catherine holds a Bachelor of Arts (English) and a postgraduate Diploma in Education from the University of Malaya. She also has a Master in Business Administration (E-commerce specialization) from the Nanyang Technological University. Catherine has been associated with learning and development from many years. She was with Brunie Shell Petroleum in Training and Development for ten years. There, she headed the Business Communication and Language Section. She also headed the Training and Development Department E-learning project as its Project Manager in developing a virtual learning centre. Presently, she is a faculty of the Nanyang Business School in the Strategy, Management and Organization Division.

Multicultural minds describe bicultural individuals - people who have internalized two cultures to the extent that both cultures influence their thoughts, feelings and actions in turn. Essentially, the internalized cultures are independent and the original culture is not replaced by the new. However, given the right priming, these different cultures are surfaced in the bicultural individuals separately. Which culture is surfaced is dependent on the cues such as context and symbols that are psychologically associated with one culture or another that these individuals are primed with.

The process whereby bicultural individuals switch mindsets is termed frame switching. To understand frame switching, one must think of culture as not being internalized in the form of an integrated and highly general structure but as a loose network of domain-specific knowledge structure. Furthermore, individuals are seen as being able to acquire more than one cultural meaning system eventhough the system may contain contradictory or conflicting constructs.

How particular pieces of cultural knowledge become operative is dependent on the accessibility of the construct. It has been a long-standing hypothesis in cognitive and social pyschology that a construct is accessible to the extent that it has been activated by recent use. Thus, if an individual is primed with iconic cultural symbols, i.e., images created or selected for their power to evoke in observers a particular frame of mind, activation of a certain network of cultural constructs would be possible. For example, if a bicultural Singaporean exposed to Singaporean icons like the Merlion, it should activate interpretative constructs in their Singaporean cultural knowledge network; exposing the same individual to American icons like a picture of Abraham Lincoln instead should activate constructs in their American cultural knowledge network.

Thus, this leads us to the following research questions:

Firstly, is it possible for bicultural individuals through priming and frame switching surface scripts and schemas for negotiation appropriate to the culture of the other negotiating party?

Another related question would be: which context ? intracultrual or intercultural mindframes ? provides the highest joint gains if a bicultural individual activates the appropriate scripts and schemas in the negotiation process?

Finally, what mediators and moderators, if any, contribute towards the possible difference in results?