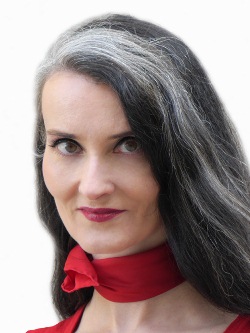 Elke Reinhuber is not your average artist, because she became a specialist on choice, decision making and counterfactual thoughts in media arts. As a decidophobic in her own life, she explores in particular alternative layers of the here and now with immersive environments and expanded photography.

Reinhuber teaches and researches as an assistant professor at Nanyang University in Singapore since July 2014. In 2013, she was awarded a practice-based doctorate degree in media arts at COFA, Sydney, suggesting the term 'Counterfactualism' as a new category for the arts and humanities, dealing with the retrospective analysis of turning points in life.
Later that year she worked as a visiting artist at the ZKM in Karlsruhe on an elaborate project about augmented reality; on behalf of the "Badisches Staatstheater", she developed a semi-circular video projection for the ballet production "Mythos", applying thermography.

Initially Elke Reinhuber received professional training as an industrial photographer and studied at the Berlin University of the Arts (UDK), as well as in London (Chelsea College), Bologna (Accademia di Belle Arti) and Sydney (SCA) before she started teaching at the Braunschweig University of the Arts (HBK) and establishing the department for Media Design at the German University in Cairo (GUC).

Her artwork was presented in several international institutions, most recently at ZKM Karlsruhe, Fotomuseum Winterthur and the Grid Photofestival Amsterdam and can be seen online on 'An Inquiry into Modes of Existence', commissioned by Bruno Latour in 2014.

In her current artistic research, Elke Reinhuber investigates on the correlation between decisions and emotions and explores different strategies of visualisation and presentation. Her PhD thesis suggests 'Counterfactualism' as a new category for fine arts and humanity, dealing with the retrospective analysis of turning points in life.