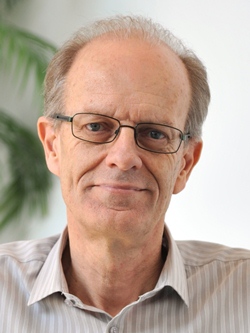 After completing his PhD, Staffan Kjelleberg conducted post-doctoral research at the University of New South Wales (UNSW), Australia before returning to Sweden to be a Research fellow with the Swedish Research Council (1983-1987). He was appointed Professor and Head of the Department of General and Marine Microbiology at the University of Göteborg in 1987. Kjelleberg was appointed Professor of Microbiology at UNSW in 1993, a position he continues to hold, and served as Head of the School of Microbiology and Immunology (1998-2000). He was appointed Visiting Professor at the Nanyang Technological University in 2008.
In 1994, Kjelleberg co-founded the Centre for Marine Bio-Innovation (CMB) at UNSW, where he currently serves as Director. The CMB is an international focal point for interdisciplinary research into biofilms and chemical signalling. Research at the CMB resulted in a strong patent portfolio for the development of quorum sensing blocking technology to combat bacterial biofilms and virulence. This technology was the basis for the start up company Biosignal Ltd, which was established in 1999, listed on ASX in 2004 and where he served as Research Director (2000-2005).
His professional experience also includes positions on national and international scientific societies, research councils, and governmental committees, advisory boards of biotechnology companies, editorial boards and editor of several scientific journals. He was President of the Swedish Society of Microbiology (1987-1992) and Vice President (2001-2004) and President (2004-2006) of the International Society for Microbial Ecology. He is currently Past President and member of the executive board of ISME (2006-2010). Kjelleberg regularly gives keynote presentations, invited lectures and serves as convenor at major scientific meetings. He is an elected fellow of the American Academy of Microbiology and was awarded the Scientia Professorship at UNSW in recognition of his scientific achievements.

Kjelleberg is internationally recognized for his studies of bacterial adaptive responses, signalling based communication between bacteria, bacterial biofilm biology, and chemically mediated interactions between bacteria and marine sessile organisms. His research approach includes molecular based studies of the mechanisms by which bacteria respond to prevailing conditions as well as environmental genomics of the biodiversity and function of natural microbial consortia. Kjelleberg has published more than 240 original papers in international refereed scientific journals and 30 books or book chapters. On the basis of strong collaborative research across microbiology, marine ecology and chemistry, and applied studies of the strategies employed by bacteria to build biofilms and communicate, substantial intellectual property has been established and utilized in biotechnology industries. Kjelleberg and his colleagues at the CMB also serve as a major research provider to several companies and organizations, including the Australian based Environmental Biotechnology Cooperative Research Centre.