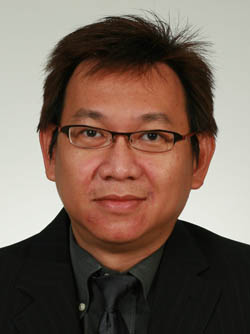 Liang-Tien, Chia received his B.Sc degree in Electrical and Electronics Engineering and PhD from Loughborough University (of Technology) in 1990 and 1994 respectively. During this period, he was awarded the University Traveling Prize for his academic achievements and he was a recipient of the Overseas Research Scholarship Award.

He is involved in a number of funded research projects and he serves as a member on numerous conference program committees and reviews for some international journals and he has published over 100 referred international conference and journal papers. He was awarded the A*Star Overseas Attachment Programme and spent one month in Microsoft Research Asia.

Liang-Tien, Chia is a council member of the Infocomm Technology Standards Committee and serves as the technical chairman of ITSC Plugfest 2006. As a Singaporean, he is an active National Serviceman serving as a Signal Officer in the Singapore Armed Forces.

His research interests can be broadly categorized into the following areas, Internet related research with emphasis on the Semantic Web, Multimedia Understanding through media analysis, annotation and adaptation, Multimodal data fusion and Multimodality Ontology for Multimedia.. He has published over 100 refereed research papers.