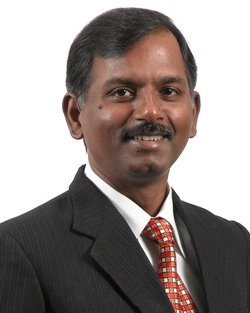 A Alphones (S’82-M’88-SM’98) received his B.Tech. from Madras Institute of Technology in 1982, M.Tech. from Indian Institute of Technology Kharagpur in 1984 and Ph.D. degree in Optically Controlled Millimeter wave Circuits from Kyoto Institute of Technology (Japan) in 1992. He was a JSPS visiting fellow from 1996-97 at Japan. During 1997-2001, he was with Centre for Wireless Communications, National University of Singapore as Senior Member of Technical Staff, involved in the research on optically controlled passive/active devices. Since 2001, he is Associate Professor at the School of Electrical and Electronic Engineering, Nanyang Technological University, Singapore.

He has more than 30 years of research experience. He is in the editorial review board of IEEE Microwave Theory and Techniques and Microwave and Wireless Components Letters. He has published and presented over 300 technical papers in International Journals/ Conferences. His current interests are electro-magnetic analysis on planar RF circuits and integrated optics, metamaterials, microwave photonics, visible light communication and 6G Transceiver Systems. His research work has been cited in the book “Millimeter Wave and Optical Integrated Guides and Circuits”, Wiley Interscience publication. He has delivered tutorials and short courses in international conferences. He had written a chapter on “Microwave Measurements and Instrumentation” in Wiley Encyclopedia of Electrical and Electronic Engineering 2002, and a chapter on “Optically Controlled Phased Array Antennas for UWB RFID Reader” in Wiley’s Handbook of Smart Antennas and RFID Systems in 2010.