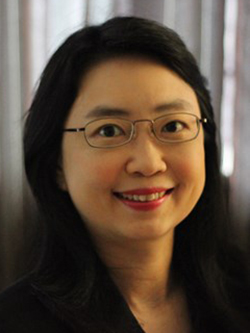 Prof Hannah Yee-Fen LIM is uniquely qualified with double degrees in Computer Science and in Law from the University of Sydney, Australia where she went on to complete a Master of Laws by Research with Honours under a Telstra Scholarship.

Hannah is an internationally recognised legal expert and scholar and has been appointed to advise international bodies such as the World Health Organization, where she was an invited Expert External Reviewer for the WHO Guidance on Ethics & Governance of Artificial Intelligence for Health.

Hannah currently also serves on the Advisory Panel of the Law Commission of England and Wales by invitation and has been advising its work on Crypto-assets, Blockchain, Cryptocurrency, NFTs and property law.

Hannah has also been advising the United Nations Commission on International Trade Law (UNCITRAL) since 2019 on areas such as AI, Fintech, Blockchain, Smart Contracts and the digital economy.

Prof Lim is also a Co-Editor on the number 1 ranked interdisciplinary journal in the Social Sciences, Big Data and Society which has an Impact Factor (IF) of 8.731.

Hannah has been awarded numerous large external grants throughout her career, including two current Singapore National Research Foundation (NRF) grants worth more than SGD$1.1 million as Principal Investigator (PI). She is currently PI or Co-PI in grants totalling more than SGD$58 million from the NRF dealing with legal and ethical issues concerning, for example AI, Autonomous Vehicles, Future Health technologies including robotics in healthcare, and Urban smart cities.

She is the author of 6 scholarly books on law and technology published by internationally established publishers such as Oxford University Press (OUP). She wrote one of the pioneering and seminal books on Internet law, Cyberspace Law in 2002 published by OUP. Hannah has published more than 45 journal articles, including most recently in Scientific Reports, the 5th most-cited journal in the world, with more than 696,000 citations in 2021. She has written more than 10 book chapters by invitation from international editors published by top tier academic book publishers and her research has been cited with approval by senior judiciary, most notably by the High Court of Australia.

With her formal qualifications in computer science, all of her legal research over the past three decades have been interdisciplinary in nature and have examined cutting edge technology and the law and regulation of such technology. For example, her dual expertise in computer science and law has enabled her to successfully conduct interdisciplinary research projects on the regulation of FinTech and projects on legal liability and ethical issues of Artificial Intelligence (AI) systems and autonomous systems including Autonomous Vehicles (AVs). Her book Autonomous Vehicles and the Law: Technology, Algorithms and Ethics was published in 2018 by Edward Elgar Publishing and is the first scholarly book published in the world on the technology of AI, AVs and the law, see https://www.e-elgar.com/shop/autonomous-vehicles-and-the-law

Hannah is also author of Data Protection in the Practical Context: Strategies and Techniques which is a leading work on, not just Singapore law, but also on the EU's General Data Protection Directive (GDPR) with coverage on data protection in the age of big data and Internet of Things. It is available at https://www.sal-e.org.sg/data-protection-in-the-practical-context-strategies-and-techniques

Hannah is a sought-after speaker and has presented over 120 papers at scholarly international meetings, such as at Oxford University, Stanford University, and her speaking engagements extend to include Europe, Asia, Australia and New Zealand. She has also conducted training for the IP Academy of Singapore and conducted workshops serving government officials from ASEAN countries and conducted privacy impact assessments for large multi-nationals.

Hannah is also a regular contributor to News media, and has been interviewed live by the likes of BBC TV News and CNA in Singapore and print media The Straits Times and The Business Times.

Hannah has served on the Law Reform Committee of Singapore, SAL, which led to the introduction of the Remote Gambling Act 2014 and she has assisted and advised the Ministry of Law, Media Development Authority and the Intellectual Property Office of Singapore and other government ministries on legal matters. Hannah is an Advocate and Solicitor of the Supreme Court of Singapore.

She is an appointed member of an International Working Group by the Centre for Biomedical Ethics, Yong Lin Loo School of Medicine, NUS on its Big Data Ethics in Biomedicine Project funded by the Singapore NMRC, which has produced a groundbreaking Ethics Framework for Big Data in Health and Research.

Hannah is a Renaissance Engineering Programme (REP) Fellow as well as a NISTH Social Impact Fellow.

Throughout her career, Hannah has taught nearly all compulsory "Priestley 11" law subjects in Australia. At NTU, in 2011, she developed and has taught the compulsory elective course Legal and Ethical issues in Sustainability. More recently, she developed and is teaching 2 courses in elite scholarship programmes at NTU, namely Ethics & Governance Issues in Technology Management for the REP programme, and AI: Law, Tech & Ethics, from Finance to Autonomous Vehicles for the NTU-USP programme.

Her contribution to the pandemic response on COVID-19 and ethics can be found at https://rdcu.be/b4l0d

Hannah also has a special interest in ethics and moral philosophy, especially its role in guiding law and law making.