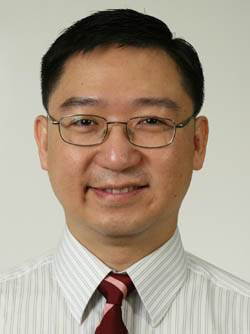 Tat-Jen is an Associate Professor in the School of Computer Science & Engineering, Nanyang Technological University. He received his BA in Engineering in 1993 and his PhD in 1996, both from the University of Cambridge. Tat-Jen was subsequently conferred a Jesus College Research Fellowship in Science in 1996-97. From 1998 to 2001, he was a research scientist at DEC/Compaq Research Lab in Cambridge, MA, USA. After joining NTU in 2002, he was concurrently a Faculty Fellow in the Singapore-MIT Alliance Computer Science Program in 2003-2006.

In research., Tat-Jen received overall best paper prizes at PROCAMS’05, BMVC’94, and in particular at ECCV'96, while his PhD student Minh-Tri Pham was awarded the PREMIA 2nd best student paper prize for their ICCV'2007 paper. Tat-Jen is an inventor on eight patents. He is currently a co-Principal Investigator in the NRF BeingTogether Centre (BTC) on 3D Telepresence, a collaboration between NTU and UNC at Chapel Hill.

Tat-Jen is an Area Chair for ICCV’19, and has served as an editorial board member for the International Journal of Computer Vision (IJCV), a General Chair for ACCV’14, an Area Chair for ICCV'09, ACCV’07, ICCV’05 and ACCV’06, Associate Editor for IJIG and IPSJ-CVA, a Program Chair for MMM’07, and a co-founder for the PROCAMS workshop series in 2003. Nationally, he has been on various review panels for A*STAR and the National Research Foundation (NRF). Tat-Jen has served for a number of terms on the NTU Senate, and previous roles held include being the Director for the Centre for Multimedia & Network Technology (CeMNet) and an affiliate faculty with the Singapore-ETH Centre’s Future Cities Lab.