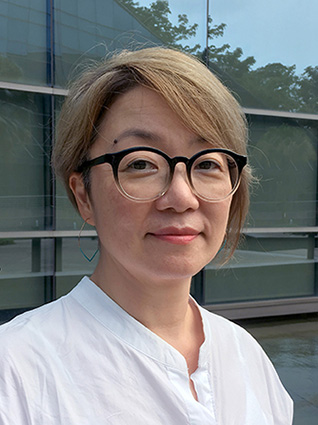 Kristy H.A. Kang is a practice-based researcher whose work explores narratives of place and geographies of cultural memory. She received her PhD at the School of Cinematic Arts at the University of Southern California, Los Angeles (USC) and is Assistant Professor at the School of Art, Design and Media at Nanyang Technological University. Prior to this she was Associate Director of the Spatial Analysis Laboratory (SLAB) at the Sol Price School of Public Policy at USC where she collaborated with urban planners and policy specialists on ways to visualize overlooked spaces and peoples. Kang was also a founding member of the Labyrinth Project research initiative on interactive narrative and digital scholarship at USC. Her works have been exhibited and presented at institutions including the Getty Research Institute, the Jewish Museum, Berlin, The ZKM Center for Art and Media, the Society for Cinema and Media Studies and received awards including the Jury Award for New Forms at the Sundance Online Film Festival.

Kang's research interests combine urban and ethnic studies, mapping, and emerging media arts to visualize cultural histories of cities and communities. Her works include "The Seoul of Los Angeles: Contested Identities and Transnationalism in Immigrant Space", an interactive online cultural history that focuses on Koreatown in Los Angeles (http://www.seoulofla.com). Using archival images, family photographs and oral histories drawn from its multiethnic community, this project is a platform for community storytelling that looks at the sociocultural networks shaping immigrant communities and how local neighborhoods negotiate a sense of place within an increasingly globalized culture. Her current research project is in collaboration with the Urban Redevelopment Authority of Singapore. Entitled "City Stories: Mapping the Spatial Narratives of Singapore’s Landscapes" this research project uses new media to uncover overlooked cultural histories of Singapore’s built environment and its diverse ethnic communities. This work explores the role that new and emerging media can play in revealing narratives of overlooked voices and cultural practices in local communities and the ways in which public media arts contributes to the construction of cultural identity.

As part of related research on public media art and urban screens, Kang was co-organizer of an international symposium “Emergent Visions: Adjacency and Urban Screens” (http://www.emergentvisions.org). Her article “Interfaces and Intentionalities: Adjacent Practices of Urban Media Art in Singapore” has been published in a special issue on Urban Interfaces in Leonardo Electronic Almanac.