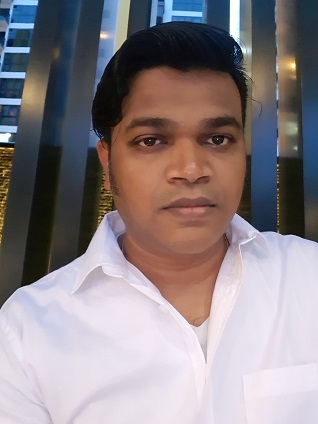 Nagaraju Thummanapalli is Senior Assistant Manager (Media) and Faculty Associate at the School of Art Design and Media (ADM).

He has completed his Master of Sciences in Mathematics and Master of Technology in Computer Science at Sri Sathya Sai Institute of Higher Learning, Prashanthi Nilayam.

He has developed a parallel toolkit for spectral analysis of a genome on a cluster of workstations. This project implements common spectral analysis techniques that are applied to DNA sequences to extract any hidden information about the gene coding. The spectral analysis techniques include autocorrelation, auto convolution, and fourier transforms. These computations were parallelized using Message Passing Interface (MPI) thereby improving the performance of the application. A toolkit (GUI) is presented to find the spectrum of the DNA sequence.

The Cell Broadband Engine (CBE) is a multi-core microprocessor microarchitecture that is widely regarded as a challenging environment for software development. To make it easier for programmers, a well-designed implementation of important collective calls are implemented and optimized. The optimization was done by studying the high bandwidth communication network on the CBE and also analyzing the various algorithms implemented for each collective call. MPI 1.1 was chosen as the standard to implement these collective calls. The interconnect network of CBE was studied in detail for getting effective ranks in collective communication. The standard collective calls such as Broadcast, Gather, Scatter, Allgather, and Alltoall were implemented for CBE using various algorithms. Each of the collective call implementations was analyzed with different ranking schemes to obtain the peak performance.

He worked as Software Engineer in Singapore and India on Digital Video Broading applications on setup box stacks and media technologies. He had joined Gamelab at the School of Computer Engineering, NTU as a Research Associate and developed programs to optimize image tracking using CUDA toolkit (parallel programming GPU Library) to improve the performance of tracking.