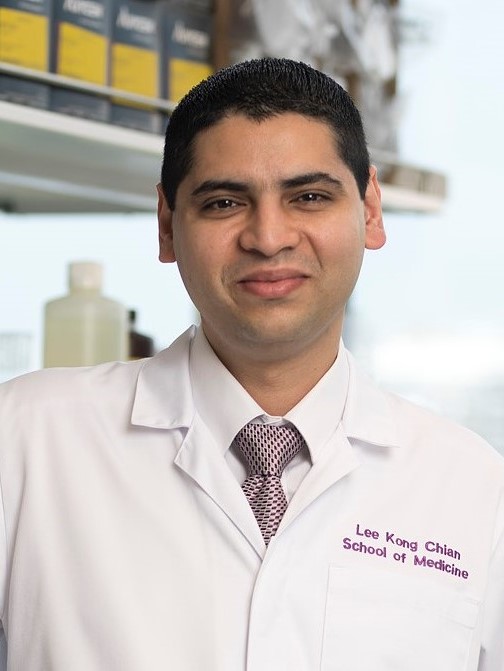 Introduction
Associate Professor Sanjay Haresh Chotirmall graduated from the Royal College of Surgeons in Ireland (RCSI) with an honours degree and the colleges’ gold medal in Microbiology. He completed his early clinical training at Beaumont Hospital Dublin, while attaining memberships of the Royal College of Physicians of Ireland (MRCPI) and the United Kingdom (MRCP UK). Following this, he completed higher specialist training in Respiratory and Critical Care Medicine across multiple hospital sites in the Republic of Ireland.

In 2007, Assoc Prof Chotirmall was awarded a prestigious ‘Molecular Medicine Ireland Clinician Scientist Fellowship’ (MMI-CSF). During this fellowship, he completed a PhD investigating the role of estrogen in cystic fibrosis. This work led to high impact publications in the American Journal of Respiratory and Critical Care Medicine (AJRCCM), as well as the New England Journal of Medicine (NEJM).

Assoc Prof Chotirmall has been awarded the Royal Academy of Medicine of Ireland (RAMI) Doctor award on two occasions (2010 & 2013), the Irish Thoracic Society Award (2011), the Dublin Centre for Clinical Research (DCCR) Young Investigator Award (2011), the MMI-CSFP Medal (2011), the Royal College of Physicians William Stokes Award for research (2010) and the American Thoracic Societies International Award (2009). Additionally, his work has been recognised by the Faculty of 1000 Biology and Medicine, an online research service that highlights critical papers published in the biological sciences, as recommended by distinguished faculty. In 2018, he was conferred as fellow of the Royal College of Physicians in Ireland (FRCPI), in 2019 as Fellow of the American College of Chest Physicians (FCCP) and in 2020 a fellow of the Royal College of Physicians of the United Kingdom (London). In 2020, he was awarded the inaugural Dean’s Award for Research at LKCMedicine and the Alumni Award for ‘Research and Innovation’ by the Royal College of Surgeons in Ireland (RCSI). In collaboration with a team of clinicians at Tan Tock Seng Hospital (TTSH), Assoc Prof Chotirmall secured the NHG Research Impact Award (2021) for his work in bronchiectasis, a chronic irreversible lung disease of high Asian prevalence.

Having published numerous peer-reviewed papers, and several book chapters to date, he is regularly invited as chair and speaker at regional, national, and international meetings. He remains a member of the International Society of Human and Animal Mycology (ISHAM) working group for fungal infections, was a steering committee member for the ATS-led international taskforce on COVID-19 management and participates in various other committees at the American Thoracic Society (ATS) and European Respiratory Society (ERS). He previously served for four consecutive years (2016-2020) on the program committee of the American Thoracic Society (ATS) annual congress for the Assembly on Allergy, Immunology, and Inflammation (AII).

Assoc Prof Chotirmall currently holds several editorial roles including at the American Journal of Respiratory and Critical Care Medicine (Deputy Editor), Respirology (Associate Editor) and npj Primary Care Respiratory Medicine (Associate Editor). He is on the editorial boards of the European Respiratory Journal, Respiratory Research and the American Journal of Physiology-Lung Cellular and Molecular Physiology. He has previously served at Mycopathologia (Executive Editor; 2018-2021), Frontiers in Pharmacology (Associate Editor; 2021), PLOS One (Academic Editor; 2015-2021) and BMC Pulmonary Medicine (Section Editor; 2013-2020). Assoc Prof Chotirmall regularly participates as an investigator for key multi-centre clinical trials in the field of Respiratory Medicine while continuing to educate undergraduates and postgraduates through formal teaching and supervision both at the bench and bedside. He has been appointed by the National University of Ireland (NUI) as the external examiner for the Perdana University-Royal College of Surgeons in Ireland (PU-RCSI) MBBS programme from 2019-2022.

As a recognised clinician-scientist, Assoc Prof Chotirmall has established a Translational Respiratory Research Group, with focus on infection, inflammation, and immunity, in the context of chronic inflammatory respiratory diseases and the lung microbiome that affect Asian populations. He continues clinical practice at Tan Tock Seng Hospital, Singapore.

Research in the Chotirmall lab shares a core translational respiratory focus with a common goal to improve patient care through advancing the understanding of disease from a scientific basis. The group pursues research in a number of areas with significant clinical importance that impact Singaporeans and other Asian populations;

Chronic inflammatory lung disease
The group investigates the basic mechanisms of clinical relevance in a number of pulmonary conditions including bronchiectasis, chronic obstructive pulmonary disease (COPD) and severe asthma. A major focus is on the investigation of bronchiectasis, a permanent and irreversible dilatation of the airway of high prevalence across Asia. Utilising genomic and molecular approaches combined with high-quality clinical phenotyping, geographic variation in this disease state are elucidated and a personalised approach to clinical manifestations and associated therapeutic responses are explored.