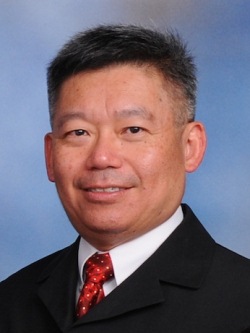 Associate Professor Eric Yap Peng Huat, a medical geneticist and a former Rhodes Scholar, spent his earlier career as a defence scientist. He was one of the pioneers in the Defence Medical & Environmental Research Institute, now part of DSO National Labs. As one of the few local researchers with dual backgrounds in medicine and science, his professional interest is in molecular genetics and genomics and its application to medicine, biotechnology and security.

A/Prof Yap’s laboratory seeks to explore the patterns and effects of variation in human, bacterial and viral genomes, and to exploit these differences for more accurate and rapid disease diagnosis. There is a particular focus on diseases and microbes prevalent in or threating East Asian populations and environments, such as melioidosis, myopia and other complex genetic diseases.

The philosophy of the lab is to strive for clinical impact by translating research into diagnostic services, devices and processes. As such, the lab has collaboration across a wide range of disciplines including genomics, molecular biology, bioinformatics, epidemiology and bioengineering. It also works actively with start-up companies and clinical end-users.

The laboratory will focus on three areas of medical genomics that could significantly change medical practice in the coming decades.

Structural variation in the human genome
The completion of the Human Genome and the 1000 Genomes Projects has yielded comprehensive catalogues of single nucleotide and small variants, but larger genetic differences (Structural Variants) are not well understood because Next Gen Sequencing (NGS) tools are not efficient in identifying them. For instance, we observed and mapped large megabase-sized deletions in a gene poor region of human Chromosome Y that result in phenotypically normal males scoring as false negatives in conventional sexing assays using the AMELY1 locus. We are now investigating another type of SV, Copy Number Variants, which varies in dosage across human populations with particular emphasis on Asian population genetics, disease associations and quantitation tools. For instance, we are studying how the number of copies of the salivary amylase gene (AMY1), which interestingly can vary 10-fold between individuals, could be higher in Asian populations with starchy diets and whether they are associated with obesity.

Genomic analysis of complex diseases
The study of Mendelian (single gene) diseases has largely been successful to the extent that whole exome and whole genome sequencing has found clinical utility for these conditions. The same cannot be said for the more common diseases of complex genetic aetiology, like myopia, hypertension, obesity, and inherited cardiac arrhythmias. Despite large scale Genome Wide Association Studies (GWAS), common alleles are found to predispose to these phenotypes, collectively account for a small part of the total heritable predisposition. This missing heritability is now thought to be due to rare variants or SV that are not amenable to older hybridisation technologies. Our lab is participating in consortia to map these susceptibility alleles by NGS of exomes and whole genomes.

Rapid Diagnostic Technologies
The lab has a long interest in innovating tools for faster and more efficient DNA analysis. We have developed rapid biochemical methods for PCR, mutation screening and genotyping. Some of these assays are used in routine molecular diagnosis of pathogens. Riding on trends in rapid prototyping, mobile computing and digital media, we are interested in designing and testing new bio-analytical lab instruments that could allow 10-100 fold improvements in throughput, speed and cost-effectiveness. Miniaturiszation of vessels, channels and pumps allow automation and integration of otherwise wasteful biochemical assays, and also speed up and increase throughput and usability significantly. The lab has been working on integrating the many laboratory steps for DNA/RNA extraction and PCR amplification for point of care diagnostics. Such microfluidic devices can be coupled with novel technologies such as micro-optics, and we are exploiting such optofluidic platforms to characterise and manipulate single cells and bacteria, enabling single cell studies and diagnosis.