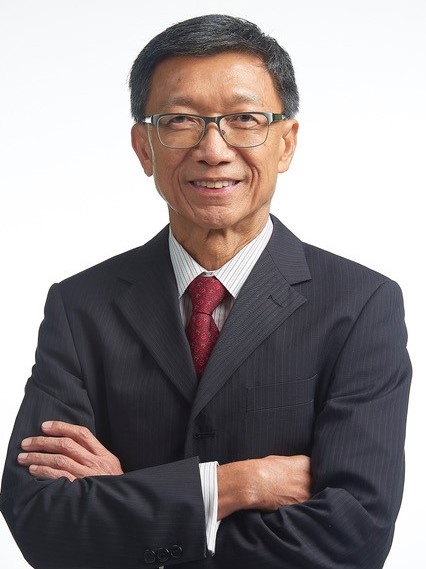 Professor Kam Chan Hin graduated with B.Eng.(Honours) in Electrical Engineering (University of Singapore), M.Sc. (Physics) (Nanyang University), M.S.E.E. (University of Southern California) and Ph.D. (Physics) (National University of Singapore). His illustrious career began in 1977 as an engineer at Fujitec Corporation before he found his true calling in education in 1984, joining the School of Electrical & Electronic Engineering (EEE) at Nanyang Technological Institute, the predecessor of Nanyang Technological University (NTU) where he served with distinction until his retirement in 2020.

Apart from his professorial duties, Professor Kam was called to serve in various capacities and leadership positions in NTU. He was appointed Academic Vice-Dean, School of Electrical & Electronic Engineering in 1996 and was promoted to Dean of EEE in 2005, leading one of the largest EEE schools in the world with more than 250 tenure track faculty and a total enrolment of more than 5000 students. During his tenure as Dean (subsequently renamed Chair), he led a comprehensive review of the school’s research activities and identified strategic areas to focus on and achieve excellence and leadership.

As a result of this strategic review, the research centres in the School were merged into mega-centres to promote interdisciplinary research for greater synergy and impact. It led to greater success in securing competitive research grants from the National Research Foundation and other funding agencies. Cumulative research funding from external sources increased three-fold from 2005 to 2008. Grants were secured to establish critical research facilities in EEE and to spearhead research in the fast growing microelectronics sector:

During his tenure as Chair of School of EEE, Professor Kam embarked on building research collaborations and partnerships with many internationally renowned institutions. In particular, he was instrumental in establishing the research alliance known as CINTRA with CNRS (French National Research Centre) and Thales, the French defence conglomerate. It led to the establishment of the CINTRA Joint Laboratory in Photonics and Nanoelectronics in 2009, a tripartite collaboration between CNRS, NTU and Thales.

Professor Kam was a co-founder of the Photonics Research Laboratory in the school in 1994. The Lab is now a part of the Photonics Institute at NTU. To date, he has published more than 300 journal papers and conference presentations in the areas of electronics, microelectronics, materials and nanotechnology, photonics, optics and high energy physics. He holds 8 patents in surface acoustic wave devices and sol gel photonics and continues to be active in research on quantum optics of nano-structures, quantum transport and nano-photonics.

As Chair of EEE, Professor Kam initiated numerous joint postgraduate degree programmes in partnership with top universities in US and Europe namely:

Another significant achievement as Chair of EEE was his success in recruiting top notch talent from around the world into the School’s faculty pool. His efforts in strengthening the school’s research and teaching laid the foundation for its rapid rise to new heights of excellence in international rankings (4th in QS 2021 World University Subject Rankings in Electrical & Electronic Engineering).

One of the most memorable achievements of the School of EEE under Professor Kam’s leadership was the launch of NTU’s first micro-satellite, the X-SAT. It was launched from the Indian Space Centre, Chennai, India on 20 April 2011 and was wholly designed, developed and built in-house by EEE’s Satellite Research Centre in partnership with DSO National Laboratories. The satellite launch was the culmination of many years of hard work and many challenges along the way and is the first satellite launched by a university in Southeast Asia.

In July 2011, Professor Kam was appointed Associate Provost (Undergraduate Education) where he was to play a pivotal role in transforming education in NTU, implementing sweeping changes to undergraduate education. He led the ideation and execution of the various initiatives arising from the recommendations of the University’s Blue Ribbon Commission Report on Undergraduate Education. Most notably, he formulated a new paradigm to prepare graduates for the workplace demands of the 21st century known as NTU Education.

He launched a new innovative University Scholars Programmes for high achieving undergraduates and made major refinements to the other special programmes such as the Renaissance Engineering and C.N. Yang Scholars programmes. Further, he introduced mandatory courses on Ethics, Sustainability and Innovation & Enterprise into the core curriculum for all undergraduate students. Cognisant of the impact of rapid technological disruption on society and industry, he led an institute-wide task force to develop mandatory courses in digital literacy to better prepare NTU graduates to meet the many disruptive challenges wrought by the 4th Industrial Revolution.

He was a key strategic leader on university-wide adoption of flipped classroom pedagogy and the transformation of lectures for online delivery. He established the Teaching Learning & Pedagogy Division (TLPD) to drive teaching and pedagogical innovations informed by research in teaching and learning. As a thought leader, he provided academic direction as Chairman of the Technology-Enhanced Learning (TEL) Steering Committee to oversee and coordinate the work of TLPD and the Learning Technology & Digital Media Division (LTDM) to ensure alignment of pedagogy, technology and learning outcomes. His proposal for integrating all teaching and learning entities in NTU, namely TLPD, LTDM, CRADLE(Centre for Research and Development in Learning) and the NTU Libraries provided the inspiration for the establishment of the newly announced Institute for Pedagogical Innovation & Research in Education (INSPIRE).

His contributions extend beyond the academic to institutional infrastructure development. As a key member of the NTU Campus Development Committee, he worked with the design architects to conceptualise and create bespoke next generation collaborative learning spaces as embodied in the new iconic buildings, The Hive and The Arc.

Recognising his leadership and impactful contributions, he was promoted to Senior Associate Provost (Undergraduate Education) in 2014, and shortly after to Deputy Provost (Education) in 2016.

In his capacity as Deputy Provost (Education), Prof Kam was responsible for the strategic oversight of all aspects of undergraduate and graduate education, residential education, student life and professional andcontinuing education. He led the strategic planning for the NTU 5-year Strategic Plan for Education(2016-2020) and oversaw the implementation of various new initiatives such as the outcome-based teaching and learning (OBTL) framework and technology-enhanced learning. He was also responsible for academic quality assurance and governance processes.

He led NTU’s Digital Learning Initiative and was chair of the i-NTULearn Steering Committee which undertook the project to upgrade NTU’s learning management platform to a cloud-based one.

He was chairman of various other university boards and committees, among them,

He also served as a member of

Concurrently, at SAF-NTU Academy (SNA) from 2011, he oversaw various continuing education initiatives for senior officers in the SAF and established academic pathways for these officers to attain higher degree qualifications.

He oversaw the Centre for Continuing Education (CCE) and Office of Professional Education (OPE) from 2011 and laid the foundation for the Centre for Professional & Continuing Education in 2016 to streamline continuing education in NTU through the merger of the CCE and the OPE. He established the framework for offering micro-credentials such as course certificates, specialist certificates, graduate certificates and MiniMasters with stackable credits towards full degree qualifications.

He provided academic oversight of the NTU Library since 2011 and initiated a strategic review of the role of the NTU Library to reposition itself as a library of the future. It led to its reorganisation in 2017 as the Office of Information, Knowledge and Library Services (OIKLS).

He served on a multitude of Boards and committees:

For his impactful contributions in education and excellent leadership he was bestowed the following awards by the Singapore Government:

Professor Kam was conferred the prestigious Emeritus Professorship for distinguished and meritorious service to NTU upon his retirement in 2020.